We have confirmation on the second single in the following territories:

FRANCE: "Behind The Mask"

As always, we will send new information as it is received!

New material has been recently copyrighted by the MJ Estate. The title is "If You’ve Got It, Bring It". The most interesting part is that the copyright has been filed under Optimum Productions Inc., the video production company of MJ. This means that the new material might be a video. Brain!!! Behind the mask 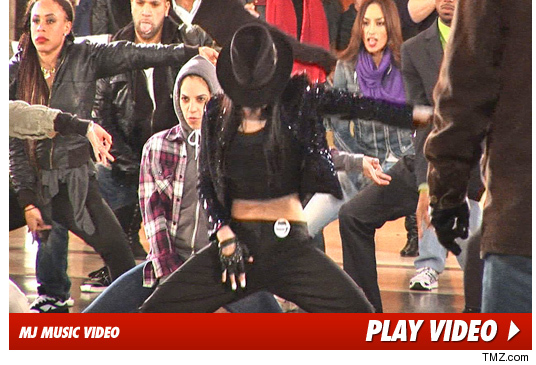 Personally, our choice for the next single off Michael Jackson’s posthumous collection of unreleased tunes Michael (you didn’t forget about that one already, did you?) would have been the menacing synth jam “Monster.” Alas, maybe the powers that be felt Lady Gaga already has a corner on all things monstrous? Anyway, production on the video for MJ’s Teddy Riley-produced song “Hollywood Tonight” is underway. Head below to watch dancers pulling their best Jackson moves out for the clip.

Hate to say it, but “Hollywood Tonight” really isn’t the best choice for a single. In addition to the chorus lacking, well, actual thought-out lyrics (other than “she’s going Hollywood, she’s going Hollywood tonight…”), the vocal is so digitally enhanced—likely due to the fact that the original demo available was very minimal—it barely sounds like it’s Michael singing.

Here are two exclusive photos from the video shoots for “Hollywood Tonight” and “Behind the Mask”!!

Source: The Estate of Michael Jackson

*
MICHAEL JACKSON’S ULTIMATE MUSIC FAN GLOBAL MASH-UP
TO LAUNCH ONLINE MARCH 7
*
INNOVATIVE*“BEHIND THE MASK” VIDEO PROJECT SEEKS CREATIVE INPUT FROM ACROSS THE WORLD TO SHAPE UNIQUE ARTISTIC VISION
*
*
New York, NY – In the spirit of Michael Jackson’s pioneering videos that pushed the creative boundaries in capturing the look, feel and emotions of music, the Estate of Michael Jackson and Sony Music will provide everyone who likes music an opportunity to help create online a unique groundbreaking music video for the single “Behind the Mask”. *Using the web in a truly innovative way, people from around the world on March 7 will come together to create an imaginative piece of Michael Jackson history in The Behind the Mask Project.
*
Led by the creative team at Radical Media and director Dennis Liu, participants will visit the website Michael Jackson | The Official Michael Jackson Site which will be loaded with simple tools that define the different roles one can play in this landmark project. First, users select a move, a lyric, or a crowd reaction; performers can even demonstrate their own moonwalk, the anti-gravity lean or the toe stand.*Then, using the site’s split-screen template, contributors can shoot their move right on the website with their web cam (or their video camera) and upload their clip at the precise time it occurs in the video.
*
After the worldwide community has come together and done their part, the director will select the top clips and weave them into this historical work of Michael Jackson video art.*The final results of The Behind the Mask Project will be unveiled during the first week in April.
*
“Behind the Mask” is a critic and fan favorite from MICHAEL – theunique collection of songsfeaturing Michael’s performancescompleted posthumously andreleased in December by the Michael Jackson Estate and Sony Music. MICHAEL was the #1 global album upon its release in December and has shipped over 3 million units worldwide making it one of the biggest albums of 2010. *The album’s success continues to underscore Michael’s importance as a global icon and superstar, transcending cultures and languages.
*
Sign up now at Michael Jackson | The Official Michael Jackson Site for updates on the project. Participate starting March 7, 2011 at Michael Jackson | The Official Michael Jackson Site.
*
Dennis Liu is an award-winning digital filmmaker at @radical.media. *Dennis quickly made a name for himself winning awards for clients that include Apple and Microsoft and being honored in the renowned "Saatchi & Saatchi New Directors Showcase". *
*
@radical.media is a global transmedia company that creates some of the world's most innovative content and the home to @radical.media design+digital. @radical.media's award-winning projects include the Academy Award®-winning documentary “The Fog of War”; the Grammy®-winning “Concert for George”; the Independent Spirit Award-winning “Metallica: Some Kind of Monster”; the award-winning digital experience “The Wilderness Downtown” for Google Creative Lab and Arcade Fire; the Grammy-nominated “The Johnny Cash Project”; the Emmy® and Golden Globe®-winning pilot episode of the hit series “Mad Men”; the Emmy®-winning “10 Days That Unexpectedly Changed America” for the History Channel; and five seasons of the critically acclaimed Sundance Channel series “Iconoclasts,” among others.
*
Source: MJ Estate / MJJMAGAZINE
*

New York, NY – In the coming weeks, the Estate and Sony Music will be releasing "Hollywood Tonight" and "Behind the Mask" from the global hit album MICHAEL. "Behind The Mask" will be released as the radio single in countries including the United States, Canada, Japan and France. "Hollywood Tonight" will be the single released to radio in the rest of the world and videos for both songs will be released worldwide. Each Sony Music affiliate will also release more information on the plans in their respective territories.

Both "Behind The Mask" and "Hollywood Tonight" are fan and critical favorites from MICHAEL – the unique collection of Michael Jackson songs completed posthumously and released in December by Sony and his Estate. The album includes material Michael had been working on for future release prior to his passing along with other vintage work he planned to place on future albums. Joe Vogel, author of the upcoming book Man in the Music: The Creative Life and Work of Michael Jackson, wrote that while "Posthumous works are notoriously tricky…This, ultimately, is the most important quality of Michael: it feels like Michael."

"Behind the Mask," which was recently completed by John McClain and Jon Nettlesbey, is praised by critics for infusing the spirit of Michael's music from the past. Rolling Stone called it "a fiercely funky cousin to "Wanna Be Startin' Somethin'" The song is written by Michael Jackson, Chris Mosdell and Ryuichi Sakamoto and produced by Michael Jackson, John McClain and Jon Nettlesbey. The song's recognizable hook is a sample of "Behind The Mask" as performed by Ryuichi Sakamoto's Yellow Magic Orchestra. And "Hollywood Tonight", which USA TODAY said "pulsates with Billie Jean-esque energy, was written during the time of the Invincible album. In 2007, Michael pulled the track out of the archives to work on the song with producer Theron "Neff-U" Feemster. "Hollywood Tonight" was written by Michael Jackson and Brad Buxer and the track was produced by Teddy Riley, Michael Jackson with co-producer by Theron "Neff-U" Feemster. Ellen DeGeneres debuted and danced to the song with her audience during her popular talk show.

MICHAEL was the #1 global album upon its release in December and has shipped over 3 million units worldwide making it one of the biggest albums of 2010. The album's nonstop success continues to underscore Michael's importance to his fans as a global icon and superstar, and shows how his music continues to transcend cultures and languages. The platinum status for MICHAEL has now grown to 17 countries including the United Kingdom, Germany, France (2x), Italy (2x), Spain, Denmark, Poland, Russia(2x), Austria, Belgium, Czech Republic (5x), Canada, India (2x), China, Taiwan, Korea and the Middle East. Michael is now Gold in 18 countries including Australia, New Zealand, Brazil, Japan, Hong Kong, Indonesia, Malaysia, Philippines, Singapore, Finland, Greece, Hungary, Ireland, Portugal, Netherlands, Norway, Portugal and Sweden.

MICHAEL marks another release under the new agreement between The Estate of Michael Jackson and Sony Music announced in March 2010 that continues the label's 35-year relationship with Michael and his music. During that time, Michael sold hundreds of millions of records, had 13 #1 singles and released the pop culture phenomenon "Thriller," which remains music's all-time bestselling album with more than 100 million copies sold worldwide.